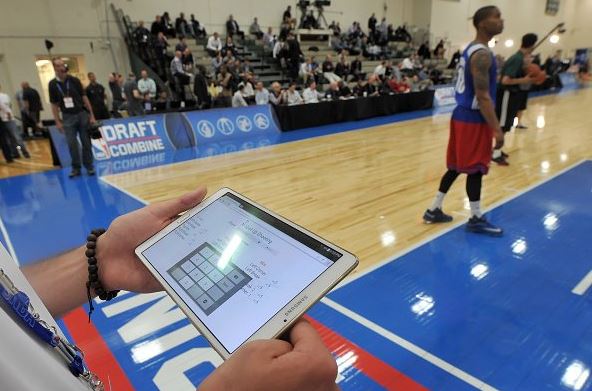 For many years, basketball has been one of the most popular games worldwide, and now, because of advancements in technology, it’s even more thrilling to watch. Technology advancements have opened up new avenues for game and practice data analysis for players and coaches. Information gleaned from player location updates and shot data analysis may offer teams a leg up on the competition. In addition, technology has significantly impacted basketball betting, allowing gamblers to make better selections and boost their odds of winning. As a result of technological advancements, gamblers may now check out NBA lines and place bets on their favorite games without ever leaving their homes. Other than betting, here are just some of the ways how technology is revolutionizing the game itself:

There are several ways in which wearable technology is changing basketball. Speed, distance and heart rate may all be monitored, providing invaluable information to coaches and players. Training sessions and overall performance may be fine-tuned with this information. One way wearable technology aids in keeping athletes healthy and safe is by giving constant, precise data on how hard an individual is training or competing. Wearables may also help coaches make more competent judgments about who should play and when by providing information about their players’ health before a game. Lastly, thanks to wearable technology, teams may now examine their opponents’ game plans with more depth than ever. Teams may learn about their opponents’ patterns and alter their strategies based on the data gleaned by monitoring player movements on the court. In sum, players and coaches alike will benefit from how wearable technology is changing basketball.

The introduction of “smart” basketballs has completely altered the sport of basketball by giving players immediate, actionable analysis of their play. Shot speed, arc, spin rate and backspin are just some parameters that can be tracked with the help of the sensors built into these balls. This information is sent to a website or app for further analysis and used in refining one’s shooting form. As a result of the tracking capabilities in smart basketballs, coaches may monitor their players’ development over time and focus on the areas where their teams need the most work. In addition, players may utilize these ball-up exercises to hone in on specific skill sets. Lastly, smart basketballs empower athletes by giving them real-time feedback on their shooting form.

Technology impacts various fields, with 3D cameras being the latest technological advancement to hit the market. By giving coaches and players a 360-degree perspective of the floor, 3D camera systems are changing the face of basketball. With 3D cameras, teams may monitor their players’ whereabouts in real-time, improving their improvisational skills. The technology also enables better analytics that may be utilized to enhance team performance and create more precise scouting reports. Additionally, fans at home may get a new and exciting viewpoint on the action on the court thanks to 3D cameras that capture the game in stunning detail. Lastly, thanks to stored 3D video coverage of previous games, coaches and players may now access previously inaccessible information, allowing for better decision-making and enhanced performance.

Basketball has been revolutionized by automated video editing software, which allows coaches and players to examine their performance swiftly. These aids allow coaches to quickly examine videos from various perspectives and zero in on problem areas. Players may also use the program to analyze their play and make improvements. Now more than ever, teams can quickly dissect plays, assess opponents’ methods, and create new approaches using automated video editing tools. In addition, they facilitate coaches’ discussions with players on the latter’s areas for development. Lastly, automatic video editing software is helping teams maximize their practice time by giving a user-friendly interface for fast editing films. As a result, they can save time and focus their energy on improving their performance.

There are many ways in which basketball is being altered by virtual reality (VR). For starters, it provides a virtual court where athletes may hone their craft without actually playing a game. They may practice their craft whenever and wherever they choose. Virtual reality (VR) also paves the way for realistic scenario simulations to be used in coaching, allowing teams to better prepare for upcoming games. In addition, virtual reality technology may be utilized to assess gameplay and provide tips to players. At last, virtual reality has ushered in a plethora of new possibilities for spectators by giving them a front-row seat to the action on the court. With so many positive outcomes, it’s no surprise that VR is transforming how basketball is played and seen.

To sum up, technological advancements have increased video analysis, data monitoring and analytics, in-game coaching methods, and player safety, all of which positively impact basketball. Technology is ever-evolving, which implies that the future of basketball might still be impacted significantly by innovations.